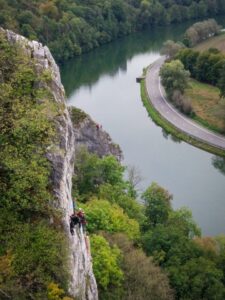 Another weekend that was decided to change into OVS only. But we feel no sorrow, for this is an opportunity to solidify new skills, practice existing ones and be happy to be on the rocks again, even if not from the coolest of heights. Cooler than multipitch heights? Getting basics of lead climbing and single pitching into near-perfect condition for having a good basis to train new skills.

Important to note: not only for non-OVS climbers = you can join also if already an independent climber!

Dit gebied is geschikt om je OVS handtekening te halen. – You can train to get your OVS signature this weekend.

*  Because of corona, the usual cancellation times don’t fully apply and instead, anyone with flu symptoms should email weekend@asac.nl to cancel even if only days before; additional costs may not be charged.